“Ours is a mission to make others happy.
What a pleasure to be so engaged!” 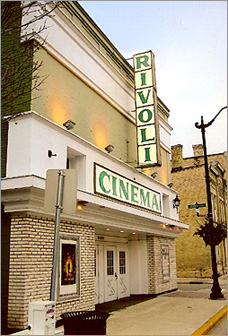 With these words on January 11, 1936, the Rivoli Theatre opened its doors to a welcoming Cedarburg audience. The former Boerner Brothers dry goods store—built in the late 1800s—had been transformed into an entertainment showplace at a cost equivalent to well over one million dollars today.

The building’s new art deco facade boasted black Carrara glass, plenty of chrome trim, an Electrolite Silhouette marquee, and sidewalk ticket booth. The opulence continued inside the theater, with “seats of full-upholstered velour which are extremely modern…heavy carpeting of a unique design…light fixtures…ultra-modern in design, giving the patrons a colorful hue of lighting effects.” Also noted in the opening night program: “A feature of the new Rivoli will be the ladies’ powder and lounging room, modernly equipped and handsomely furnished.”

Opening night featured A Tale of Two Cities, starring Ronald Coleman, along with a newsreel and cartoon. Admission was a quarter—15 cents on Bargain Tuesdays—and 10 cents for children. The Rivoli has operated continuously since that night, becoming part of the Marcus Corporation in 1956 until its purchase by the Cedarburg Landmark Preservation Society in late 2006.

Since premiere night, the Rivoli Theatre has been a fundamental part of Cedarburg’s unique culture—a setting for first dates, community gatherings, family outings—the small connections that build a community.

What’s Next for the Rivoli?